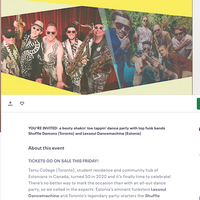 About this event TICKETS GO ON SALE THIS FRIDAY!

Tartu College (Toronto), student residence and community hub of Estonians in Canada, turned 50 in 2020 and it’s finally time to celebrate! There’s no better way to mark the occasion than with an all-out dance party, so we called in the experts: Estonia’s eminent funksters Lexsoul Dancemachine and Toronto’s legendary party-starters the Shuffle Demons. While this is the first ever visit for Lexsoul Dancemachine to Canada, the Shuffle Demons performed their hit Spadina Bus in Estonia in 1991, days before the country was granted its independence. Lexsoul Dancemachine also share a love of public transport, performing atop a moving bus for 3.5 hours in Tallinn. Both bands have a reputation for captivating stage shows all the way down to their matching splashy attire. Estonian singer-songwriter, music historian and artist champion Vaiko Eplik will not only host the evening but will be performing a crash course of Estonian music history both in Canada and at home. Whether you’re a regular Estonian community events, or couldn't place it on a map, as long as you like to move your feet - you’re invited!

Raw street funk on one side, with sweet soul on the other—Lexsoul Dancemachine is a 6-man groove band known for tearing venues apart with their stage presence. Active since 2013, the aim of the machine is to hypnotize feel-good music lovers with thumping bass lines, syncopated rhythms, repetitive grooves and soulful vocals. It’s the kind of music you can break dance to, although in between those hard-hitting sounds you’ll find some more tender grooves.

December 2015 saw Lexsoul Dancemachine self-release their debut album after a successful kick-starter campaign. Deus Lex Machina was put out on vinyl, CD and digitally. 2016 was filled with live gigs in the Baltic-Nordic region, including Tallinn Music Week, Positivus, Funky Elephant and Pori Jazz Festival in Finland.

After making a big local splash with the record, the band broke the international level courtesy of a 5-star review from monkeyboxing.com, an UK blog with an appetite for the Funk. From there on, it was picked up by Craig Charles Funk and Soul Show on BBC 6 and BBC 2 with singles “Beef Grinder” and “Coconuts” on the rotation ever since.

“It’s like the Electric Six and Bohannon had a child and it grew up to be Lexsoul Dancemachine.” – Flea Market Funk

“In short there’s no posturing here, they wanna get into it man, you know – like a…well…like a sex machine. JB would be proud.”- monkeyboxing.com

“Hot-blooded, full frontal funk assault not for those of a delicate disposition.” – Craig Charles